William Gallaher is the hero known as Crossbow, the best friend of Rodney Weller, aka Stray.

William (Will) Gallaher "grew up" in the wildernesses of Vermont, going on hunting trips with his father at a very early age. Will took to the outdoors very easily, and despite his age, showed a prowess with the weapons he was given. When he saw Rotty on television, he decided he would try his hand at local law enforcement as a vigilante. At first, he took on the name "Quarrel," and distinguished himself as a valuable resource to the police. However, Will had a secret that he dared not reveal, other than his identity; Will was gay. Knowing that the small town would never accept him for who he was, he soon ran away to New York City where he changed his code name to "Crossbow" and, through a series of lucky encounters, he joined up with Rotty and other teen heroes to form the Clique, the world's first teen hero team.

Will formed a fast friendship with both Rodney and Matt Reilly, aka Heavy Metal. The three formed the core of the team, and when eventually Rodney and Matt left, Will questioned whether or not he would continue to be a crime fighter. It was a chance rescue of singer, Adam Free, that changed his mind. The two young men fell in love and Adam reinforced his role as a member of AEGIS and also got Will to reconcile with his parents. Adam and Will maintain a very close friendship, although both have new significant others.

Will was also very close with Rodney's father, the Doberman, even after Rodney quit crime fighting. The two would often team up, substituting the loss they felt for a son and best friend with each other. At one point, on one mission, Will assumed the mantle of Rotty, but quickly gave it back. He eventually recommended Jace Ransome to the Doberman, and he became the hero's sidekick. 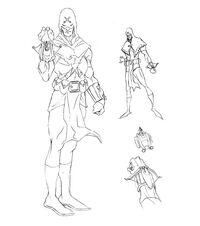 Crossbow does not have any special metahuman powers. He is an Olympic level athlete with the strength and agility of a man in his 20's that engages in regular exercise and training.

Crossbow is proficient with most firearms and projectile weapons, including blow darts, shuriken, and javelins. However, as his name suggests, Will is most comfortable with a crossbow, a weapon he has rebuilt and perfected into two wrist mounted weapons. He's also an expert shot and a sharpshooter, both with a gun/rifle and a bow and arrow.

Community content is available under CC-BY-SA unless otherwise noted.
Advertisement